5) Inflation: The inflation rate has increased a little recently, and some key measures are now close to the the Fed's 2% target. Will core inflation rate rise in 2017? Will too much inflation be a concern in 2017?

Although there are different measure for inflation (including some private measures) they all show that inflation is now close to the Fed's 2% inflation target - except Core PCE.

Note:  I follow several measures of inflation, median CPI and trimmed-mean CPI from the Cleveland Fed.  Core PCE prices (monthly from the BEA) and core CPI (from the BLS). 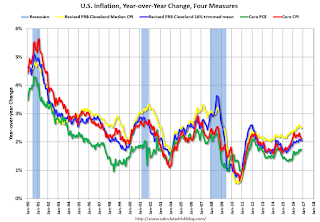 These measures have been trending up slowly.

The Fed is projecting core PCE inflation will increase to 1.8% to 1.9% by Q4 2017.  However there are risks for higher inflation.  The labor market is approaching full employment, and the new administration is proposing some fiscal stimulus (tax cuts, possible infrastructure spending), so it is possible - as a result - that inflation will increase more than expected in 2017 and 2018.

Currently I think PCE core inflation (year-over-year) will increase further and be close to 2% in 2017, but too much inflation will still not be a serious concern in 2017.

Here are the Ten Economic Questions for 2017 and a few predictions: