Other key indicators include the December ISM manufacturing and non-manufacturing indexes, the November trade deficit, and December auto sales.

Also the Q4 quarterly Reis surveys for office, apartment and malls will be released this week.

All US markets will be closed in observance of the New Year's Day Holiday. 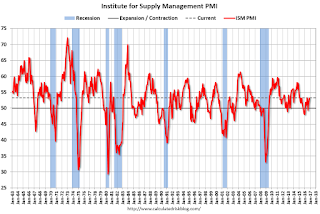 The ISM manufacturing index indicated expansion at 53.2% in November. The employment index was at 52.3%, and the new orders index was at 53.0%.

10:00 AM: Construction Spending for November. The consensus is for a 0.6% increase in construction spending. 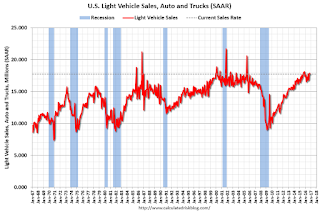 This graph shows light vehicle sales since the BEA started keeping data in 1967. The dashed line is the November sales rate.

2:00 PM: The Fed will release the FOMC minutes for the December meeting.

8:15 AM: The ADP Employment Report for December. This report is for private payrolls only (no government). The consensus is for 172,000 payroll jobs added in December, down from 216,000 added in November.

8:30 AM ET: The initial weekly unemployment claims report will be released.  The consensus is for 260 thousand initial claims, down from 265 thousand the previous week.

10:00 AM: the ISM non-Manufacturing Index for December. The consensus is for index to decrease to 56.8 from 57.2 in November.

The consensus is for the unemployment rate to increase to 4.7%. 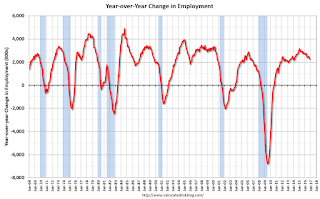 In November, the year-over-year change was 2.25 million jobs. 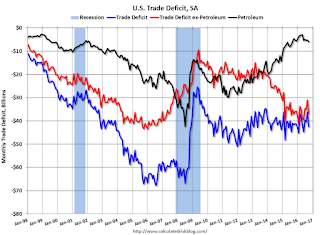 8:30 AM: Trade Balance report for November from the Census Bureau.

The consensus is for the U.S. trade deficit to be at $44.5 billion in November from $42.6 billion in October.