Earlier I posted some questions for next year: Ten Economic Questions for 2017. I'll try to add some thoughts, and maybe some predictions for each question.

This graph shows nationwide inventory for existing homes through November 2016. 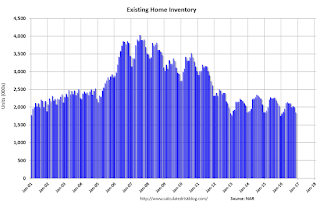 This was the lowest level for the month of November since 2000.

Inventory is not seasonally adjusted, and usually inventory decreases from the seasonal high in mid-summer to the seasonal lows in December and January as sellers take their homes off the market for the holidays. 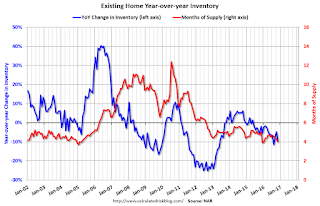 Inventory decreased 9.3% year-over-year in November compared to November 2015. (blue line).  Note that the blue line (year-over-year change) turned slightly positive in 2013, but has been negative since mid-2015.

I've heard reports of more inventory in some coastal areas of California, in New York city and for high rise condos in Miami.  But we haven't seen a change in trend for inventory yet.

Here are the Ten Economic Questions for 2017 and a few predictions: