Las Vegas: On Pace for Record Visitor Traffic and Convention Attendance in 2016

Since then Las Vegas visitor traffic has recovered to new record highs.

As of October, visitor traffic is running 2.9% above the record set in 2015 and on pace to be 10% above the pre-recession peak.

And convention attendance has returned too. Here is the data from the Las Vegas Convention and Visitors Authority. 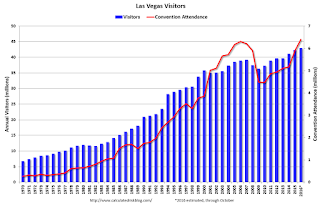 At this pace, convention attendance will set a new record in 2016, and be close to 2% above the pre-recession peak set in 2006.

There were many housing related conventions during the housing bubble, so it has taken some time for convention attendance to recover.  But attendance has really picked up over the last two years.