This gives a total of 5.34% delinquent or in foreclosure.


Today, the Data & Analytics division of Black Knight Financial Services, Inc. (NYSE: BKFS) released its latest Mortgage Monitor Report, based on data as of the end of October 2016. In the immediate aftermath of the U.S. presidential election, 30-year mortgage rates have spiked by 49 basis points (BPS) in just a few short weeks. This month, Black Knight examines the impact of these jumps on the population of borrowers who could both likely qualify for and have incentive to refinance as well as the wider matter of home affordability. As Black Knight Data & Analytics Executive Vice President Ben Graboske explained, the effects have been dramatic, but must still be seen in the proper historical context.

“The results of the U.S. presidential election triggered a treasury bond selloff, resulting in a corresponding rise in both 10-year Treasury and 30-year mortgage interest rates,” said Graboske. “As mortgage rates jumped 49 BPS in the weeks following the election, we saw the population of refinanceable borrowers cut by more than half. From the 8.3 million borrowers who could both likely qualify for and had interest rate incentive to refinance immediately prior to the election, we’re now looking at a population of just 4 million total, matching a 24-month low set back in July 2015. While there are still two million borrowers who could save $200 or more per month by refinancing and a cumulative $1 billion per month in potential savings, this is less than half of the $2.1 billion per month that was available just four short weeks ago. These changes will likely have an impact on refinance origination volumes moving forward. And, since higher interest rates tend to reduce the refinance share of the market – specifically in higher credit segments – which typically outperform their purchase mortgage counterparts, they may potentially impact overall mortgage performance as well.
emphasis added 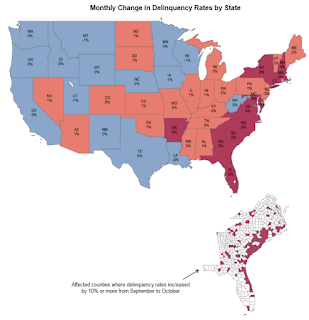 This map from Black Knight shows the monthly change in delinquency rate - and the impact of Hurricane Matthew on mortgage delinquencies.

• The hardest hit areas were along the coast, and correspondingly higher increases in delinquencies were observed in these areas as well

• In some of the hardest hit areas of South Carolina, delinquency rates rose by more than 20 percent from September to October

• Since the worst of the storm hit the southeast on October 7th and 8th, after the majority of borrowers would have made their mortgage payments, we could yet see further impact in November’s mortgage performance data 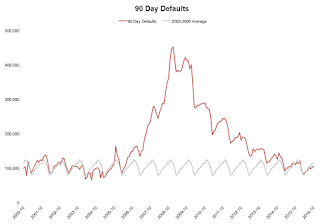 This graph from Black Knight shows the number of 90 day defaults.  This is back to normal.


• The inflow of new troubled loans has now returned to pre-recession levels; on average, over the past six months default volumes have been four percent below historic (2000-2006) norms

• However, the share of mortgages becoming 90-days delinquent each month has actually averaged 13 percent below historic norms over the same period, due to the larger number of active mortgages today than in the early 2000s

• Despite making up only 25 percent of all active mortgages, pre-recession vintages (2007 and prior) still account for 60 percent of all new defaults, even though these mortgages now have nine or more years of seasoning

That last sentence is amazing.