Hotels: Occupancy Rate on Track to be 2nd Best Year

Note: The year-over-year decline this week was related to timing of Halloween, but, in general, hotels are finishing the year strong. It is unlikely, but still possible that 2016 could be the best year ever for hotel occupancy.  2016 will be at least the 2nd best ever behind 2015.

From HotelNewsNow.com: STR: US hotel results for week ending 5 November


The U.S. hotel industry reported mixed results in the three key performance metrics during the week of 30 October through 5 November 2016, according to data from STR.

Opposite from last week, STR analysts cite a negative effect on results due to a Halloween calendar shift. The holiday was not included in the comparable week from 2015.
emphasis added 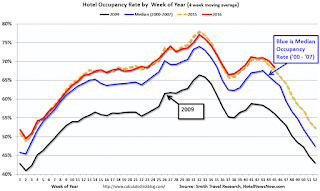 For hotels, the Fall business travel season is slowing down, and the occupancy rate will decline into the holiday season.