New home sales for October were reported below the consensus forecast at 563,000 on a seasonally adjusted annual rate basis (SAAR). And the previous months were revised down.

The glass is more than half full.  This is very solid year-over-year growth and just suggests that expectations were ahead of reality. This is why we look at the trend and not just one month.

Note that these sales (for October) were before the recent increase in mortgage rates. 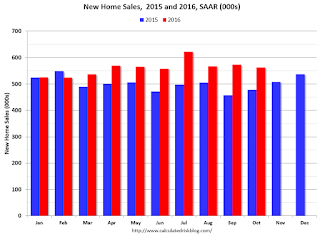 This graph shows new home sales for 2015 and 2016 by month (Seasonally Adjusted Annual Rate).  Sales to date are up 12.7% year-over-year, because of very strong year-over-year growth over the last seven months.

Overall  I expected lower growth this year, in the 4% to 8% range.  Slower growth seemed likely this year because Houston (and other oil producing areas) will have a problem this year.   It looks like I was too pessimistic on new home sales this year. 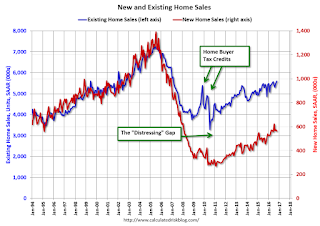 The "distressing gap" graph shows existing home sales (left axis) and new home sales (right axis) through October 2016. This graph starts in 1994, but the relationship had been fairly steady back to the '60s.