From the Eric Morath at the WSJ: Retailers Rushed to Hire for Holidays, a Sign of Tight Labor Market


Retailers geared up to hire holiday-season workers in August this year, an unusually early start showing how competition has intensified for temporary help in a tight labor market.

Data from job-search site Indeed.com shows retailers, and the warehouse and logistics firms they compete with for seasonal labor, started searching for temporary workers a month earlier than in recent years. This suggests retailers and other firms “anticipate stronger consumer demand and expect that it will be harder to find the people they want to hire,” said Indeed economist Jed Kolko.

Last year, more than one in four retail workers hired in the fourth quarter of 2015 started their jobs in October, the highest share on records back to the 1930s. 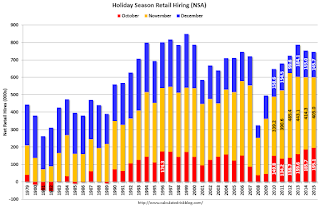 This graph really shows the collapse in retail hiring in 2008. Since then seasonal hiring has increased back close to more normal levels.

Note that retailers have been hiring earlier with more seasonal hires in October (red).

Based on the information in the WSJ article, it appears seasonal hiring will be at record levels in October this year.