According to the Federal Reserve Bank of Cleveland, the median Consumer Price Index rose 0.2% (2.1% annualized rate) in September. The 16% trimmed-mean Consumer Price Index also rose 0.2% (2.1% annualized rate) during the month. The median CPI and 16% trimmed-mean CPI are measures of core inflation calculated by the Federal Reserve Bank of Cleveland based on data released in the Bureau of Labor Statistics' (BLS) monthly CPI report.

Note: The Cleveland Fed has the median CPI details for September here. Motor fuel was up 94% annualized in September! 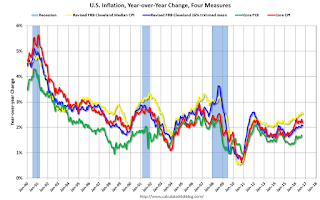 Using these measures, inflation has generally been moving up, and most of these measures are at or above the Fed's target (Core PCE is still below).
Posted by Calculated Risk on 10/18/2016 11:13:00 AM
Newer Post Older Post Home