First here is the weekly data from HotelNewsNow.com: STR: US hotel results for week ending 10 September


he U.S. hotel industry recorded mixed results in the three key performance metrics during the week of 4-10 September 2016, according to data from STR. 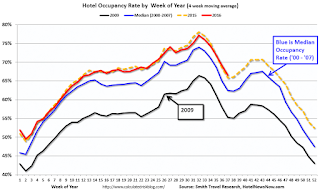 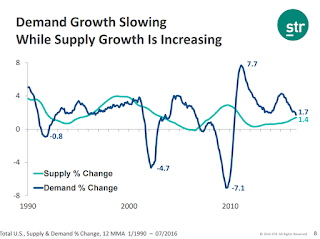 The second graph is from a Smith Travel Research data presentation. This shows that demand is slowing and supply is increasing. This suggests the occupancy rate will decline in 2017.

This graph is from a data presentation by STR. These presentations are available here with a free registration (including local data depending on presentation).