By request, here is another update of an earlier post through the June 2016 employment report including all revisions.

Note: We frequently use Presidential terms as time markers - we could use Speaker of the House, or any other marker.

First, here is a table for private sector jobs. The top two private sector terms were both under President Clinton.  Reagan's 2nd term saw about the same job growth as during Carter's term.  Note: There was a severe recession at the beginning of Reagan's first term (when Volcker raised rates to slow inflation) and a recession near the end of Carter's term (gas prices increased sharply and there was an oil embargo).


The first graph shows the change in private sector payroll jobs from when each president took office until the end of their term(s). Presidents Carter and George H.W. Bush only served one term, and President Obama is in the fourth year of his second term. 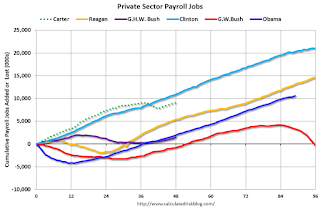 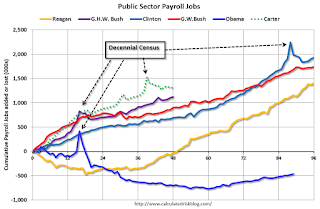 However the public sector has declined significantly since Mr. Obama took office (down 460,000 jobs). This has been a significant drag on overall employment.


Looking forward, I expect the economy to continue to expand through 2016 (at least), so I don't expect a sharp decline in private employment as happened at the end of Mr. Bush's 2nd term (In 2005 and 2006 I was warning of a coming down turn due to the bursting of the housing bubble - and I predicted a recession in 2007).

For the public sector, the cutbacks are clearly over.  Right now I'm expecting some increase in public employment during the remainder of Obama's 2nd term, but nothing like what happened during Reagan's second term.

Below is a table of the top three presidential terms for private job creation (they also happen to be the three best terms for total non-farm job creation).

Clinton's two terms were the best for both private and total non-farm job creation, followed by Reagan's 2nd term.