On occupancy from HotelNewsNow.com: STR: US hotel results for week ending 4 June


The U.S. hotel industry reported mostly negative year-over-year results in the three key performance metrics during the week of 29 May through 4 June 2016, according to data from STR.

Affected significantly by a Memorial Day calendar shift, the industry’s occupancy decreased 6.8% to 64.6%. Average daily rate was flat at US$118.45. Revenue per available room dropped 6.8% to US$76.56.
emphasis added 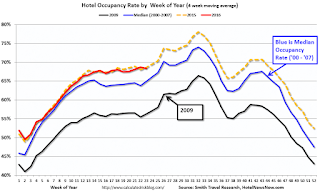 The occupancy rate should increase over the Summer travel period.