Industrial production increased 0.7 percent in April after decreasing in the previous two months. Manufacturing output rose 0.3 percent after declining the same amount in March. The index for utilities jumped 5.8 percent in April, as the demand for electricity and natural gas returned to a more normal level after being suppressed by warmer-than-usual weather in March. Mining production fell 2.3 percent in April, and it has decreased more than 1 1/2 percent per month, on average, over the past eight months. At 104.1 percent of its 2012 average, total industrial production in April was 1.1 percent below its year-earlier level. Capacity utilization for the industrial sector increased 0.5 percentage point in April to 75.4 percent, a rate that is 4.6 percentage points below its long-run (1972–2015) average.
emphasis added 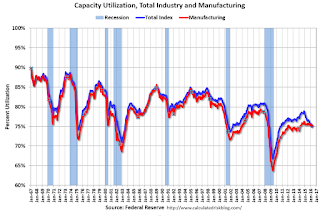 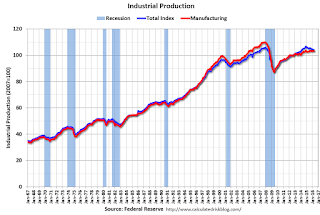