Note: Last month I noted that energy expenditures as a percentage of PCE had hit an all time low. Here is an update through the March 2016 PCE report.

Below is a graph of expenditures on energy goods and services as a percent of total personal consumption expenditures through March 2016.

This is one of the measures that Professor Hamilton at Econbrowser looks at to evaluate any drag on GDP from energy prices. 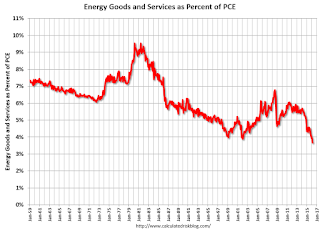 In March 2016, energy expenditures as a percentage of PCE declined to another all time low of just under 3.7%.

However, WTI oil prices increased from $30.32 per barrel in February to $37.55 in March - so energy as a percentage of PCE will probably increase a little over the next few months.