The key economic report this week is March retail sales on Wednesday.

For prices, PPI and CPI will be released this week.

For manufacturing, March Industrial Production and the April NY Fed manufacturing survey will be released this week. 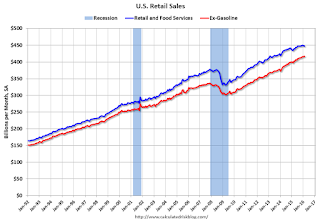 8:30 AM ET: Retail sales for March will be released.  The consensus is for retail sales to increase 0.1% in March.

10:00 AM: Manufacturing and Trade: Inventories and Sales (business inventories) report for February.  The consensus is for a 0.1% decrease in inventories.

8:30 AM: The initial weekly unemployment claims report will be released.  The consensus is for 270 thousand initial claims, up from 267 thousand the previous week. 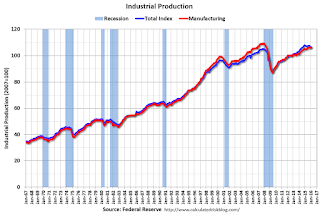 9:15 AM: The Fed will release Industrial Production and Capacity Utilization for March.

The consensus is for a 0.1% decrease in Industrial Production, and for Capacity Utilization to decrease to 75.4%.

10:00 AM: University of Michigan's Consumer sentiment index (preliminary for April). The consensus is for a reading of 91.8, up from 91.0 in March.