From HotelNewsNow.com: STR: US hotel results for week ending 9 April


The U.S. hotel industry recorded mostly positive results in the three key performance metrics during the week of 3-9 April 2016, according to data from STR.

The following graph shows the seasonal pattern for the hotel occupancy rate using the four week average.  The occupancy rate should mostly move sideways for the next couple of months, and then increase further during the Summer travel period. 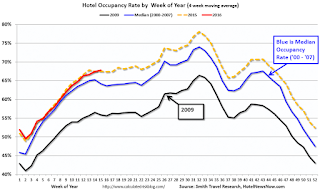