Here is the unofficial problem bank list for March 2016.


Update on the Unofficial Problem Bank List for March 2016. During the month, the list fell from 228 institutions to 222 after eight removals and two additions. Assets dropped by $1.4 billion to an aggregate $64.6 billion. A year ago, the list held 349 institutions with assets of $106.2 billion.

The additions this month were both from Kentucky -- Peoples Bank & Trust Company of Hazard, Hazard, KY ($278 million) and Blue Grass Federal Savings and Loan Association, Paris, KY ($38 million). Perhaps in a few months, the list will begin to see new additions from banks operated in local economies where the oil & gas industry is a large driver. 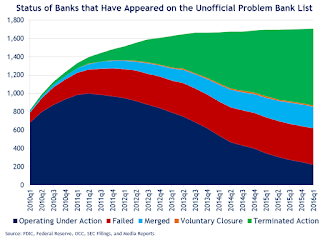 With it being the end of the first quarter, we bring an updated transition matrix to detail how banks are moving off the Unofficial Problem Bank List. Since the Unofficial Problem Bank List was first published on August 7, 2009 with 389 institutions, a total of 1,705 institutions have appeared on a weekly or monthly list at some point. There have been 1,483 institutions that have transitioned through the list. Departure methods include 837 action terminations, 396 failures, 236 mergers, and 14 voluntary liquidations. The first quarter of 2015 started with 250 institutions on the list, so the 28 action terminations during the quarter reduced the list by 11.2 percent. Of the 389 institutions on the first published list, 26 or 6.7 percent still remain more than six years later. The 396 failures represent 23.2 percent of the 1,705 institutions that have made an appearance on the list. This failure rate is well above the 10-12 percent rate frequently cited in media reports on the failure rate of banks on the FDIC's official list.