The national vacancy rate for neighborhood and community shopping centers declined by 10 basis points during the fourth quarter to 10.0%. Although both net absorption and construction remain at weak levels, net absorption is slowly starting to pull ahead of construction and push the vacancy rate down again. The vacancy rate for malls also declined by 10 basis points to 7.8%, also demonstrating a bit of resurgence. Malls have had a better recovery than neighborhood and community centers up to this juncture, but neither has had a strong recovery on a widespread basis.
...
Asking and effective rents once again grew by 0.5% during the fourth quarter. There has not been much change in the rental growth rates for neighborhood and community centers over the last five quarters. Given such an elevated vacancy rate these results are in line with expectations. Over the last 12 months asking and effective rents grew by 2.0% and 2.2%, respectively, which is a bit of an improvement from the 1.8% and 2.0% that they respectively increased during 2014. This was the best calendar-year performance for rent growth since 2007, before the recession.
emphasis added 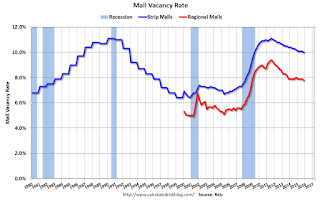