Since then Las Vegas visitor traffic recovered to a new record high in 2014.

And convention attendance is returning. Here is the data from the Las Vegas Convention and Visitors Authority. 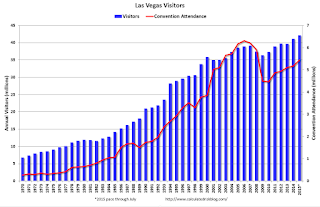 Convention traffic is up 5.3% from last year, but is still below the pre-recession peak.  In general, the gamblers are back - and the conventions are returning.

It seemed like there were many housing related conventions during the housing bubble, so it may be some time before convention attendance hits a new high.