Joe Weisenthal and Alix Steel have invited me to be on Bloomberg's 'What'd You Miss?' today. We are going to discuss demographics and the impact on renting.

The title of this post is from a report by Oregon Office of Economic Analysis economist Josh Lehner on the Portland housing market. Josh was kind enough to allow me to use a couple of his graphs for my appearance on Bloomberg.

Here are the three graphs I'm planning on discussing: 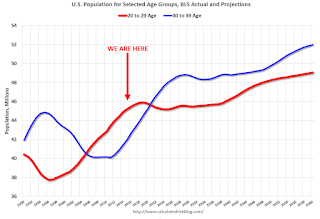 Note: I used a similar graph five years ago to argue there would be a surge in rentals from both demographics, and also from people losing their homes to foreclosure. 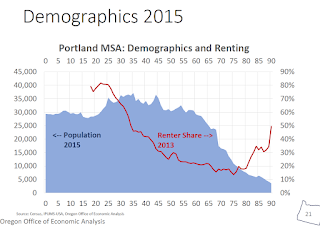 Renting peaks when people are in their 20s, and then steadily falls off (behavior may change a little going forward).

The second graph from Lehner shows population projections for 2025. 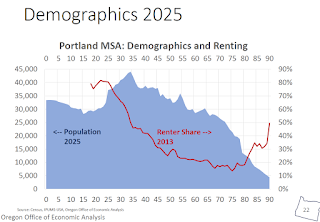 The peak in population has moved past the peak renting years.

This doesn't mean 2015 is "peak renter".  But this does suggest growth will slow for multi-family, but not a sharp decline.

The recent Reis survey on apartment vacancies and rents also suggests some slowdown, but overall the rental market is still very tight.