Here is a review of three key demographic points:

2) Demographics are the key reason the Labor Participation Rate has declined.

3) Demographics are a key reason real GDP growth is closer to 2% than 4%.

It was over five years ago that we started discussing the turnaround for apartments. Then, in January 2011, I attended the NMHC Apartment Strategies Conference in Palm Springs, and the atmosphere was very positive.

The drivers were 1) very low new supply, and 2) strong demand (favorable demographics, and people moving from owning to renting).

Demographics are still favorable, but my sense is the move "from owning to renting" has slowed. And more supply has been coming online.

On demographics, a large cohort has been moving into the 20 to 34 year old age group (a key age group for renters). Also, in 2015, based on Census Bureau projections, the two largest 5 year cohorts are 20 to 24 years old, and 25 to 29 years old (the largest cohorts are no longer be the "boomers").  Note: Household formation would be a better measure than population, but reliable data for households is released with a long lag. 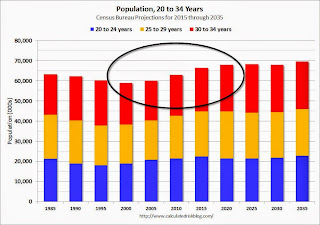 The circled area shows the recent and projected increase for this group.

From 2020 to 2030, the population for this key rental age group is expected to remain mostly unchanged.

This favorable demographic is a key reason I've been positive on the apartment sector for the last five years - and I expect new apartment construction to stay relatively strong for a few more years.

And looking forward on demographics ... 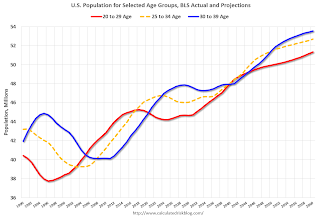 But what about the decline in the prime working age labor force participation rate? 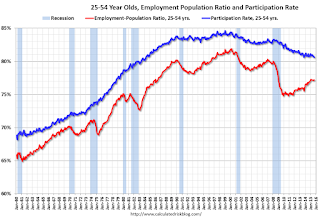 A couple of key points: 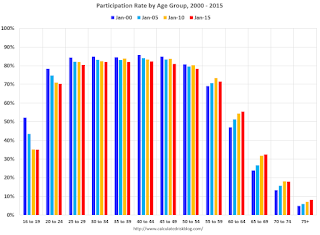 2) However, the lowest participation rate is for the 50 to 54 age group.

Everyone is aware that there large cohorts moving into retirement - and a large cohort in the 20 to 24 age group - but there has also been in a shift in the prime working age groups. 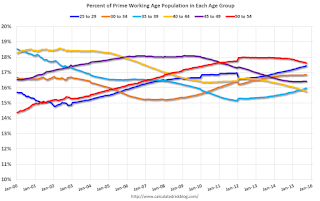 This graph shows the percent of the prime working age population in each 5 year age group.  Note: Jumps are due to changes in population control.

Since the lowest prime participation is for the 50 to 54 age group (the second lowest is for the 25 to 29 age group), lets focus on those two groups. The 50 to 54 age group is the red line (now the largest percentage of the prime working age) and the 25 to 29 age group is the blue line (now the second largest percentage).  Just these shifts in prime demographics would lead to a somewhat lower prime working age participation rate.    Overall, the impact of this shift is small compared to long term trends.

Lets focus on just one age group and just for men to look at the long term trend. 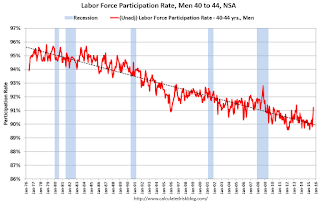 This fourth graph shows the 40 to 44 year old men participation rate since 1976 (note the scale doesn't start at zero to better show the change). 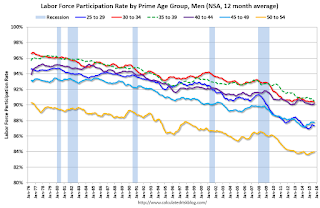 Clearly there is a downward trend for all 5 year age groups. When arguing about the decline in the prime participation rate, we need to take these long term trends into account. 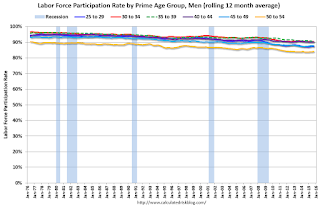 And this graph shows the same data but with the full scale (0% to 100%).  The trend is still apparent, but the decline has been gradual.

The bottom line is that the participation rate was declining for prime working age workers before the recession, there the key is understand and adjusting for the long term trend..

Here is a look at the participation rate of women in the prime working age groups over time. 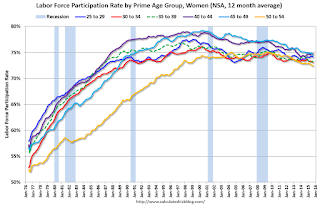 For women, the participation rate increased significantly until the late 90s, and then started declining slowly.  This is a more complicated story than for men, and that is why I used prime working age men to show the gradual downward decline in participation that has been happening for decades (and is not just recent economic weakness). 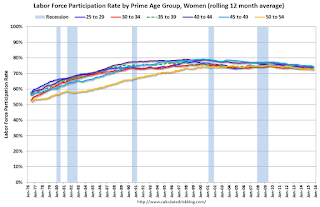 The second graph shows the same data for women but with the full scale (0% to 100%).  The upward participation until the late 80s is very clear, and the decline since then has been gradual.

And a third key point: We should have been expecting slower growth this decade due to demographics - even without the housing bubble-bust and financial crisis.

So here is a graph of the year-over-year change in the labor force since 1950 (data from the BLS). 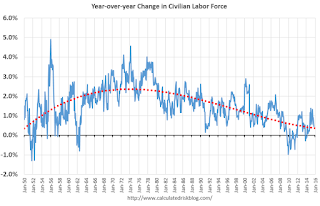 The data is noisy - because of changes in population controls and the business cycle - but the pattern is clear as indicated by the dashed red trend line. The labor force has been growing slowly recently but the rate of increase has been declining for some time.

Now here is a look at real GDP for the same period. 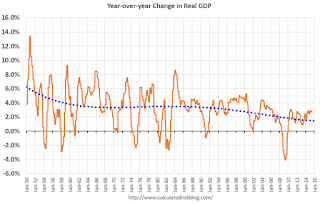 The GDP data (year-over-year quarterly) is also noisy, and the dashed blue line shows the trend.

GDP was high in the early 50s - and early-to-mid 60s because of government spending (Korean and Vietnam wars).  As in example, in 1951, national defense added added 6.5 percentage points to GDP.  Of course we don't want another war ... 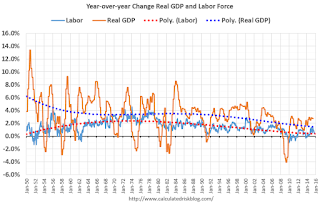 Other than the early period with a boost from government spending, the growth in GDP has been tracking the growth in the labor force pretty well.  The difference in growth between the dashed blue and red lines is due to gains in productivity.

The good news is that will change going forward (prime working age population will grow faster next decade).  But right now, due to demographics, 2% real GDP growth is the new 4%.