The U.S. Census Bureau announced today that advance estimates of U.S. retail and food services sales for August, adjusted for seasonal variation and holiday and trading-day differences, but not for price changes, were $447.7 billion, an increase of 0.2 percent from the previous month, and 2.2 percent above August 2014. ... The June 2015 to July 2015 percent change was revised from +0.6 percent to +0.7 percent. 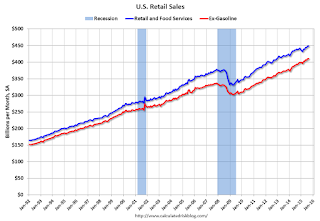 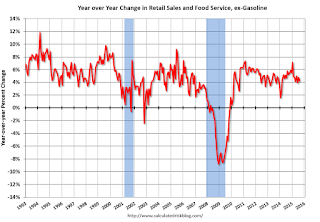 Retail and Food service sales ex-gasoline increased by 4.2% on a YoY basis (2.2% for all retail sales including gasoline).

The increase in August was below the consensus expectations of a 0.3% increase, however sales in July were revised up. An OK report.
Posted by Calculated Risk on 9/15/2015 08:38:00 AM
Newer Post Older Post Home