From S&P: July Home Price Gains Concentrated in the West According to the S&P/Case-Shiller Home Price Indices


The S&P/Case-Shiller U.S. National Home Price Index, covering all nine U.S. census divisions, recorded a slightly higher year-over-year gain with a 4.7% annual increase in July 2015 versus a 4.5% increase in June 2015. The 10-City Composite was virtually unchanged from last month, rising 4.5% year-over-year. The 20-City Composite had higher year-over-year gains, with an increase of 5.0%.
...
Before seasonal adjustment, the National Index posted a gain of 0.7% month-over-month in July. The 10-City Composite and 20-City Composite both reported gains of 0.6% month-over-month. After seasonal adjustment, the National index posted a gain of 0.4%, while the 10-City and 20-City Composites were both down 0.2% month-over-month. All 20 cities reported increases in July before seasonal adjustment; after seasonal adjustment, 10 were down, nine were up, and one was unchanged.
...
“The S&P/Case Shiller National Home Price Index has risen at a 4% or higher annual rate since September 2012, well ahead of inflation. Most of the strength is focused on states west of the Mississippi. The three cities with the largest cumulative price increases since January 2000 are all in California: Los Angeles (138%), San Francisco (116%) and San Diego (115%). The two smallest gains since January 2000 are Detroit (3%) and Cleveland (10%). The Sunbelt cities – Miami, Tampa, Phoenix and Las Vegas – which were the poster children of the housing boom have yet to make new all-time highs. [says David M. Blitzer, Managing Director and Chairman of the Index Committee at S&P Dow Jones Indices.]
emphasis added 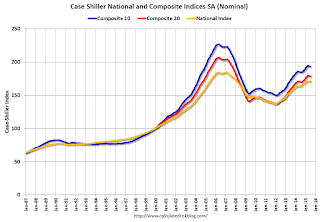 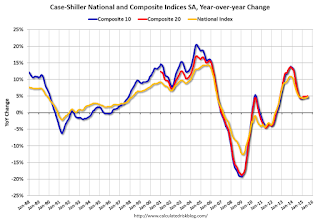 The National index SA is up 4.7% year-over-year.

Prices increased (SA) in 9 of the 20 Case-Shiller cities in July seasonally adjusted.  (Prices increased in 20 of the 20 cities NSA)  Prices in Las Vegas are off 39.5% from the peak, and prices in Denver and Dallas are at new highs (SA). 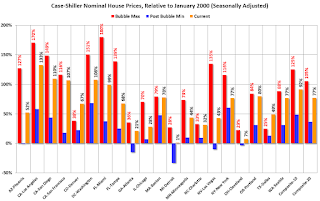 These are nominal prices, and real prices (adjusted for inflation) are up about 40% since January 2000 - so the increase in Phoenix from January 2000 until now is about 12% above the change in overall prices due to inflation.