The number of job openings again rose to a series high of 5.8 million on the last business day of July, the U.S. Bureau of Labor Statistics reported today. The number of hires and separations edged down to 5.0 million and 4.7 million, respectively. Within separations, the quits rate was 1.9 percent for the fourth month in a row, and the layoffs and discharges rate declined to 1.1 percent. ...
...
Quits are generally voluntary separations initiated by the employee. Therefore, the quits rate can serve as a measure of workers’ willingness or ability to leave jobs. ... There were 2.7 million quits in July, little changed from June. Although the number of quits has been increasing overall since the end of the recession, the number has held between 2.7 million and 2.8 million for the past 11 months.
emphasis added

Note: The difference between JOLTS hires and separations is similar to the CES (payroll survey) net jobs headline numbers. This report is for July, the most recent employment report was for August. 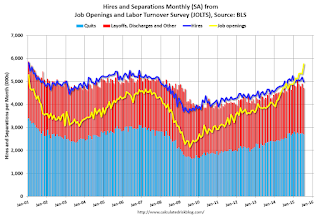 The number of job openings (yellow) are up 22% year-over-year compared to July 2014.

Quits are up 6% year-over-year. These are voluntary separations. (see light blue columns at bottom of graph for trend for "quits").

This is another solid report.  It is a good sign that job openings are at a series high, and that quits are increasing year-over-year.
Posted by Calculated Risk on 9/09/2015 10:05:00 AM
Newer Post Older Post Home