Real gross domestic product -- the value of the goods and services produced by the nation's economy less the value of the goods and services used up in production, adjusted for price changes -- increased at an annual rate of 3.7 percent in the second quarter of 2015, according to the "second" estimate released by the Bureau of Economic Analysis. In the first quarter, real GDP increased 0.6 percent.

The GDP estimate released today is based on more complete source data than were available for the "advance" estimate issued last month. In the advance estimate, the increase in real GDP was 2.3 percent. With the second estimate for the second quarter, nonresidential fixed investment and private inventory investment increased. ...
emphasis added

Solid growth. And above the consensus of 3.2%. 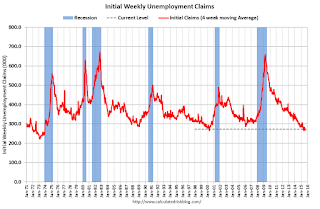 
The dashed line on the graph is the current 4-week average. The four-week average of weekly unemployment claims decreased to 272,500.

This was sligthly higher than the consensus forecast of 270,000, and the low level of the 4-week average suggests few layoffs.
Posted by Calculated Risk on 8/27/2015 08:37:00 AM
Newer Post Older Post Home