Note: The Cleveland Fed has the median CPI details for June here. Motor fuel was up sharply again in June. 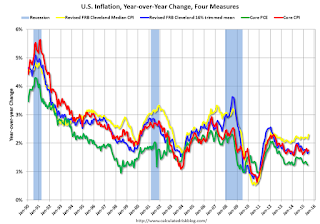 On a year-over-year basis these measures suggest inflation remains below the Fed's target of 2% (median CPI is above 2%).