Freddie Mac reported that the Single-Family serious delinquency rate declined in May to 1.58%, down from 1.66% in April. Freddie's rate is down from 2.10% in May 2014, and the rate in May was the lowest level since November 2008.

Note: Fannie Mae will report their Single-Family Serious Delinquency rate for May in a few days. 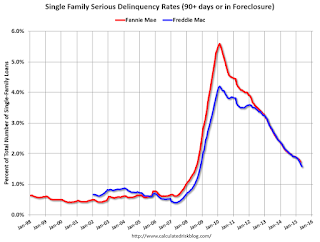 Although the rate is declining, the "normal" serious delinquency rate is under 1%.