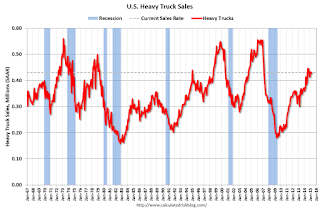 Heavy truck sales really collapsed during the recession, falling to a low of 181 thousand in April 2009 on a seasonally adjusted annual rate basis (SAAR). Since then sales have more than doubled and hit 446 thousand SAAR in August 2014.   Sales have declined a little since August (possibly due to the oil sector), and were at 430 thousand SAAR in March.

The level in August 2014 was the highest level since February 2007 (over 7 years ago).  Sales have been above 400 thousand SAAR for nine consecutive months, are now above the average (and median) of the last 20 years.