Notes: This CoreLogic House Price Index report is for February. The recent Case-Shiller index release was for January. The CoreLogic HPI is a three month weighted average and is not seasonally adjusted (NSA).

Including distressed sales, 26 states and the District of Columbia were at or within 10 percent of their peak prices. Six states, including Colorado (+9.8 percent), New York (+8.2 percent), North Dakota (+7.7 percent), Texas (+8.5 percent), Wyoming (+8.4 percent) and Oklahoma (+5.2 percent), reached new home price highs since January 1976 when the CoreLogic HPI started. 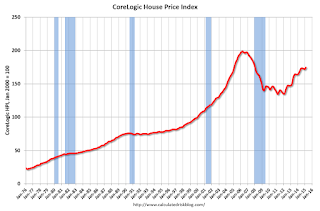 This index is not seasonally adjusted, and this was a solid month-to-month increase. 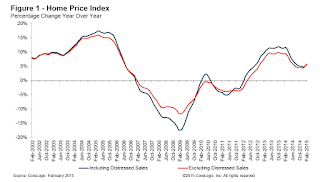 The second graph is from CoreLogic. The year-over-year comparison has been positive for thirty six consecutive months suggesting house prices bottomed early in 2012 on a national basis (the bump in 2010 was related to the tax credit).

The YoY increase has mostly moved sideways over the last seven months.
Posted by Calculated Risk on 4/07/2015 09:11:00 AM
Newer Post Older Post Home