The key economic report this week is February housing starts on Tuesday.

For manufacturing, the February Industrial Production and Capacity Utilization report, and the March NY Fed (Empire State), and Philly Fed surveys, will be released this week.

The FOMC meets on Tuesday and Wednesday.

8:30 AM: NY Fed Empire State Manufacturing Survey for March. The consensus is for a reading of 7.0, down from 7.8 last month (above zero is expansion). 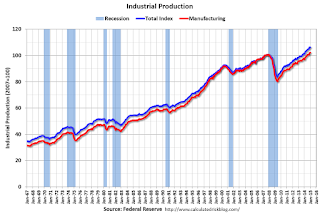 9:15 AM: The Fed will release Industrial Production and Capacity Utilization for February.

The consensus is for a 0.3% increase in Industrial Production, and for Capacity Utilization to increase to 79.5%.

10:00 AM: The March NAHB homebuilder survey. The consensus is for a reading of 56, up from 55 last month.  Any number above 50 indicates that more builders view sales conditions as good than poor. 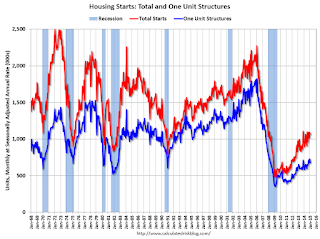 8:30 AM: Housing Starts for February.

The consensus is for total housing starts to decrease to 1.040 million (SAAR) in February.

10:00 AM: Regional and State Employment and Unemployment (Monthly) for January

During the day: The AIA's Architecture Billings Index for February (a leading indicator for commercial real estate).

2:00 PM: FOMC Meeting Announcement.  The FOMC is expected to make no change to policy, however the word "patient" will probably be removed from the statement opening the possibility of a rate hike as early as June.

2:00 PM: FOMC Forecasts This will include the Federal Open Market Committee (FOMC) participants' projections of the appropriate target federal funds rate along with the quarterly economic projections.

8:30 AM: The initial weekly unemployment claims report will be released. The consensus is for claims to increase to 293 thousand from 289 thousand.

10:00 AM: the Philly Fed manufacturing survey for February. The consensus is for a reading of 7.0, up from 5.2 last month (above zero indicates expansion).