Wednesday:
• 7:00 AM ET, the Mortgage Bankers Association (MBA) will release the results for the mortgage purchase applications index.

• At 8:30 AM, Durable Goods Orders for February from the Census Bureau. The consensus is for a 0.5% increase in durable goods orders.

◦Travel for the month is estimated to be 237.4 billion vehicle miles.

The rolling 12 month total is moving up, after moving sideways for several years. 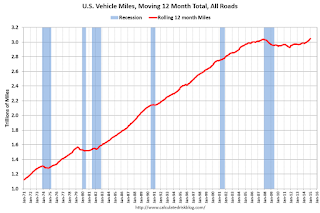 Miles driven had been below the previous peak for 85 months - an all time record. 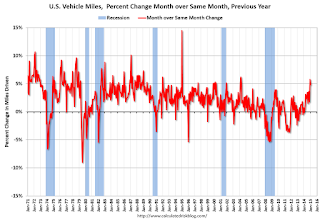 In January 2015, gasoline averaged of $2.21 per gallon according to the EIA.  That was down significantly from January 2014 when prices averaged $3.39 per gallon.

However gasoline prices are just part of the story.  The lack of growth in miles driven over the last 7 years was probably also due to the lingering effects of the great recession (lack of wage growth), the aging of the overall population (over 55 drivers drive fewer miles) and changing driving habits of young drivers.