In addition to housing starts for January, the Census Bureau also released the Q4 "Started and Completed by Purpose of Construction" report yesterday.

It is important to remember that we can't directly compare single family housing starts to new home sales. For starts of single family structures, the Census Bureau includes owner built units and units built for rent that are not included in the new home sales report. For an explanation, see from the Census Bureau: Comparing New Home Sales and New Residential Construction


We are often asked why the numbers of new single-family housing units started and completed each month are larger than the number of new homes sold. This is because all new single-family houses are measured as part of the New Residential Construction series (starts and completions), but only those that are built for sale are included in the New Residential Sales series.

However it is possible to compare "Single Family Starts, Built for Sale" to New Home sales on a quarterly basis.

The quarterly report released yesterday showed there were 106,000 single family starts, built for sale, in Q4 2014, and that was above the 102,000 new homes sold for the same quarter, so inventory increased slightly in Q4 (Using Not Seasonally Adjusted data for both starts and sales). 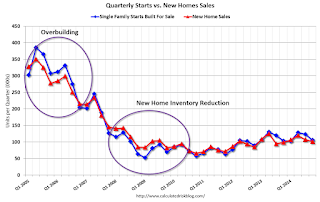 In 2005, and most of 2006, starts were higher than sales, and inventories of new homes increased. The difference on this graph is pretty small, but the builders were starting about 30,000 more homes per quarter than they were selling (speculative building), and the inventory of new homes soared to record levels. Inventory of under construction and completed new home sales peaked at 477,000 in Q3 2006.

Now it looks like builders are generally starting about the same number of homes that they are selling, and the inventory of under construction and completed new home sales is still very low.

Note: new home sales are reported when contracts are signed, so it is appropriate to compare sales to starts (as opposed to completions). This is not perfect because of the handling of cancellations, but it does suggest the builders are keeping inventories under control. 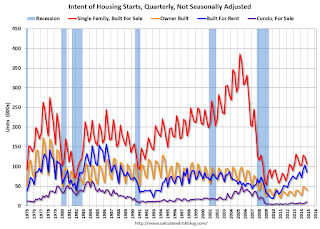 Single family starts built for sale were up about 2% compared to Q4 2013.

Owner built starts were up 25% year-over-year. And condos built for sale are just above the record low.

The 'units built for rent' has increased significantly over the last few years, and is near the highest level since the mid-80s, and was at the same level as in Q4 2013.
Posted by Calculated Risk on 2/19/2015 01:03:00 PM
Newer Post Older Post Home