The Long Beach data showed a significant decline in port traffic due to the labor issues that were tentatively settled on Friday.

Note: There is usually a seasonal slowdown in February or March (depending on the timing of the Chinese New Year).  February traffic will be very slow this year, but March should be strong. 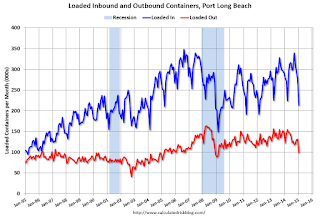 This decline in traffic was primarily due to the ongoing labor negotiations.