Earlier I posted some questions for next year: Ten Economic Questions for 2015. I'll try to add some thoughts, and maybe some predictions for each question.

Here is a review of the Ten Economic Questions for 2014.

Every year some analysts (and clueless politicians) forecast runaway inflation.  And every year they have been wrong.  Someday inflation will be a concern - but not yet!

Although there are different measure for inflation (including some private measures) they all show that inflation is at or below the Fed's 2% inflation target.  I follow several measures of inflation, median CPI and trimmed-mean CPI from the Cleveland Fed.  Core PCE prices (monthly from the BEA) and core CPI (from the BLS). 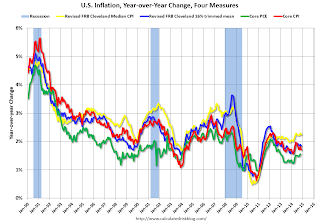 So currently I think core inflation (year-over-year) will increase in 2015, but too much inflation will not be a serious concern this year.