Earlier I posted some questions for next year: Ten Economic Questions for 2015. I'll try to add some thoughts, and maybe some predictions for each question.

Here is a review of the Ten Economic Questions for 2014.

10) Housing Inventory: It appears housing inventory bottomed in early 2013. Will inventory increase further in 2015, and, if so, by how much?

This graph shows nationwide inventory for existing homes through November 2014. 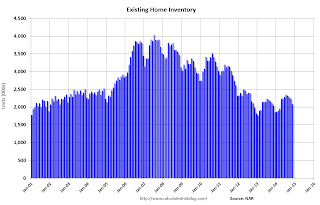 The NAR numbers are the usual measure of inventory.  However Zillow also has some inventory data (by state, city, zip code and more here).   We have to be careful using the Zillow data because the coverage is probably increasing, but looking at the zip code data, it appears inventory is up about 9% year-over-year.  This ranges from a sharp year-over-year decrease in some cities (like Denver) to a sharp increase in other areas (like Bakersfield, CA).   The housing market is slowly moving back to normal, and real estate is local!

As the market moves back to normal, it seems homeowners will sell for the usual reasons (changing jobs, kids, etc).