From the Dallas Fed: Texas Manufacturing Activity Picks Up Pace


Texas factory activity increased again in December, according to business executives responding to the Texas Manufacturing Outlook Survey. The production index, a key measure of state manufacturing conditions, rose strongly from 6 to 15.8, indicating output grew at a faster pace in December.

Other measures of current manufacturing activity reflected continued growth during the month. The capacity utilization index rose from 9.8 to 12.4, due to a higher share of respondents noting an increase in December than in November. The shipments index climbed to 19.6, its highest reading in five months. The new orders index moved down from 5.6 to 1.3, suggesting moderating demand growth, but more than a quarter of firms noted increases in new orders over November levels.

Perceptions of broader economic conditions remained positive this month. The general business activity index fell from 10.5 to 4.1. The company outlook index was almost unchanged at 8.4, with 21 percent of respondents noting an improved outlook. 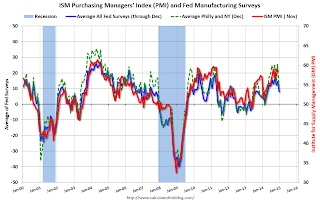 It seems likely the ISM index will be solid, but show slower expansion in December. The ISM Manufacturing Index for December will be released on Friday, January 2nd, and the consensus is for a decrease to 57.5 from 58.7 in November.
Posted by Calculated Risk on 12/29/2014 10:35:00 AM
Newer Post Older Post Home