The new home sales report for August was above expectations at 504 thousand on a seasonally adjusted annual rate basis (SAAR).  This was the highest sales rate since May 2008.  However, we need to remember this was just one month of data.

Also sales for the previous three months were revised up a combined 16,000 sales SAAR.

Sales were up 33.0% year-over-year in August - however sales declined sharply in Q3 2013 as mortgage rates increased - so this was an easy comparison.  The comparison for September will be pretty easy too. 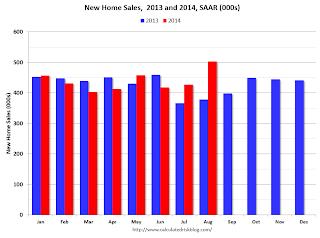 The comparisons to last year are easy right now, and I expect to see year-over-year growth for the 2nd half of 2014.

And here is another update to the "distressing gap" graph that I first started posting several years ago to show the emerging gap caused by distressed sales.  Now I'm looking for the gap to close over the next few years. 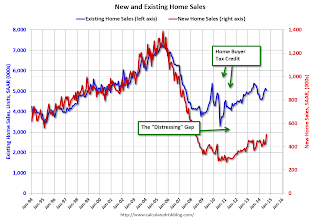 The "distressing gap" graph shows existing home sales (left axis) and new home sales (right axis) through June 2014. This graph starts in 1994, but the relationship has been fairly steady back to the '60s.

I expect existing home sales to decline or move sideways (distressed sales will continue to decline and be partially offset by more conventional / equity sales).  And I expect this gap to slowly close, mostly from an increase in new home sales. 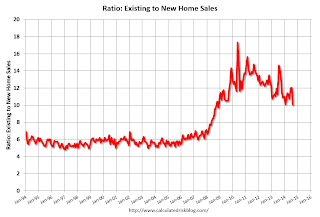 In general the ratio has been trending down, and this ratio will probably continue to trend down over the next several years.