CBO Projection: Budget Deficits in Future Years to be Smaller than Previous Forecast

The Congressional Budget Office (CBO) released new budget projections today An Update to the Budget and Economic Outlook: 2014 to 2024. The projected budget deficits have been reduced for most of the next ten years, although the projected deficit for 2014 has been revised up slightly (by $14 billion).

NOTE: In the previous update, the CBO revised down their projection of the deficit for fiscal 2014 from 3.7% to just under 2.9% of GDP.


The federal budget deficit for fiscal year 2014 will amount to $506 billion, CBO estimates, roughly $170 billion lower than the shortfall recorded in 2013. At 2.9 percent of gross domestic product (GDP), this year's deficit will be much smaller than those of recent years (which reached almost 10 percent of GDP in 2009) and slightly below the average of federal deficits over the past 40 years.
...
CBO's current economic projections differ in some respects from the ones issued in February 2014. The agency has significantly lowered its projection of growth in real GDP for 2014, reflecting surprising economic weakness in the first half of the year. However, the level of real GDP over most of the coming decade is projected to be only modestly lower than estimated in February. In addition, CBO now anticipates lower interest rates throughout the projection period and a lower unemployment rate for the next six years.
emphasis added 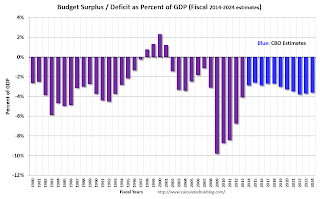 This graph shows the actual (purple) budget deficit each year as a percent of GDP, and an estimate for the next ten years based on estimates from the CBO.