In November 2012, I was interviewed by Joe Weisenthal at Business Insider. One of my comments during our discussion on state and local governments was:


I wouldn’t be surprised if we see all of a sudden a report come out, “Hey, we’ve got a balanced budget in California.”

At the time that was way out of the consensus view. And a couple of months later California announced a balanced budget, see The California Budget Surplus

The situation has improved since then. Here is the most recent update from California State Controller John Chiang: Controller Releases June Cash Update


State Controller John Chiang today released his monthly cash report for the month of June, and announced that the state's General Fund -- the primary account from which California funds its day-to-day operations and programs -- ended the fiscal year with a positive cash balance for the first time since June 30, 2007. A positive cash balance means that the state had funds available to meet all of its payment obligations without needing to borrow from Wall Street or the $23.8 billion available in its more than 700 internal special funds and accounts.
...
According to the monthly report covering California's cash balance, receipts and disbursements in June 2014, the General Fund had $1.9 billion in cash on June 30, marking the first time it has ended the fiscal year in the black since 2007, when it ended the year with $2.5 billion in the bank.

This is just one state, but I've been expecting local and state governments (in the aggregate) to add to both GDP and employment in 2014. 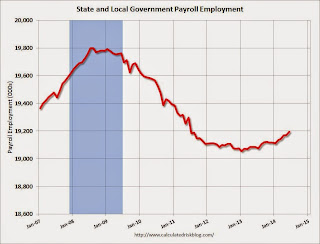 It is pretty clear that state and local employment is now increasing.