The national vacancy rate was unchanged during the first quarter at 16.8%. This reflects the pattern in vacancy rate movement that we have seen since the market began recovering during the first quarter of 2011. Quarters of slightly declining vacancy have often been followed by quarters with no change in the vacancy rate. During that interval we have not had a quarter with a vacancy compression greater than 10 basis points. Over the last twelve months, the vacancy rate is down just 20 basis points, on par with last quarter, indicating that in aggregate we are not yet seeing an acceleration in the recovery in the office market. National vacancies remain elevated at 430 basis points above the sector's cyclical low of 12.5% recorded during the third quarter of 2007. Although job growth is accelerating, it is likely that newly created office jobs are taking up under‐utilized space and not yet creating much demand for the leasing of new or additional space.
emphasis added

On absorption and new construction:

Construction increased by 3.884 million square feet during the second quarter. This is the lowest quarterly figure since the first quarter of 2013. Although the national vacancy rate did not change, new supply outpaced net absorption during the quarter.


Asking and effective rents both grew by 0.7%, respectively, during the second quarter. These figures are essentially the same as last quarter. Asking and effective rents have now risen for fifteen consecutive quarters. However, we continue to see slow but ongoing acceleration in rent growth over time. Asking rent growth was 1.6% during 2011, 1.8% during 2012, and 2.1% in 2013, and 2.2% over the prior 12 months during the first quarter. During the second quarter, the 12‐month change in asking rent increased to 2.5%. 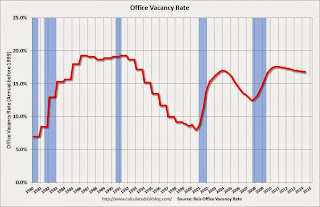