A few comments on Housing Starts

This was just the fourth month with starts at over a 1 million annual pace since early 2008 (Seasonally adjusted annual rate, SAAR). Starts were over 1 million in November and December of 2013 - and then starts were a little weaker in Q1 - and then were at or above 1 million in April and May.

The weak start to 2014 was due to several factors: severe weather, higher mortgage rates, higher prices and probably supply constraints in some areas.

It is also important to note that the year-over-year comparison will be easier for housing starts for the next several months.  There was a huge surge in housing starts early in 2013, and then a lull - and finally more starts at the end of the year.

The bottom line is the housing recovery is ongoing and will continue. 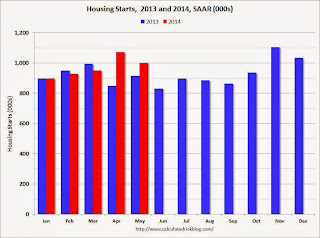 This year, I expect starts to continue to increase (Q1 will probably be the weakest quarter) - and more starts combined with an easier comparison means starts will probably be up double digits year-over-year. 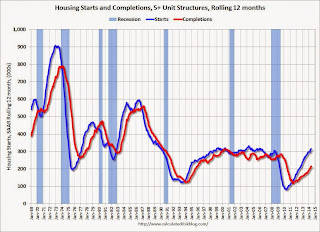 The rolling 12 month total for starts (blue line) has been increasing steadily, and completions (red line) are lagging behind - but completions will continue to follow starts up (completions lag starts by about 12 months). 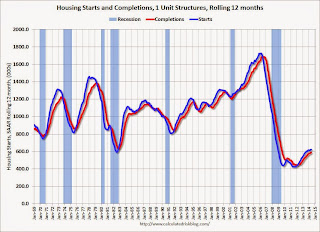 Starts have been moving up (but the increase has slowed recently), and completions have followed.