Answer: This isn't a contradiction. When we talk about an increasing participation rate for older workers, we are referring to people in a certain age group. As an example, for people in the "60 to 64" age group, the participation rate has increased over the last ten years from 51.1% in April 2004 to 55.7% in April 2014 (see table at bottom for changes in all 5 year age groups over the last 10 years). 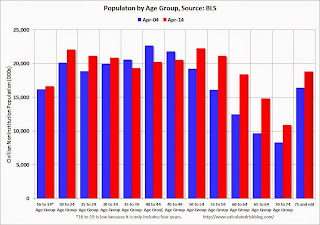 This graph shows the population in each 5 year age group in April 2004 (blue) and April 2014 (red).  Note: Not Seasonally Adjusted, Source: BLS.

This table is population, labor force and participation rate by age group for April 2004 and April 2014.