I've been reading several articles on the March employment report this morning, and I have to comment on the graph below.

From the WSJ: U.S. Reaches a Milestone on Lost Jobs


Private-sector payrolls hit a record 116.09 million, passing the peak set in January 2008, but they are far below where they would be if the labor market's trajectory weren't interrupted. And government jobs remain well short of their high point.

And the article had the following graph for private employment: 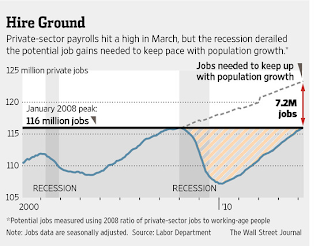 To create this graph, the WSJ used the ratio of private employment in January 2008 (115.977 million) to the total civilian noninstitutional population. The dashed line assumes that this ratio stayed constant since January 2008 - and seems to suggest that there should be 7.2 million more private sector jobs today.

To review: the participation rate has declined for both demographic and cyclical reasons. There are several key demographics trends, the two most obvious being the large cohort (baby boomers) moving into lower participation age (over 55), and the long term trend of more younger people (16 to 24) staying in school.  The cyclical decline is due to the lingering effects of the housing bust and financial crisis on the labor market.  There is an ongoing discussion about how much of the decline has been due to demographics, and how due to the effects of the great recession.  I think more than half is demographics (other research suggests about half, some suggests less).

If we just looked at demographics, the civilian noninstitutional population for the prime working age group (25 to 54) has declined by 1.5 million people since Jan 2008!  So ignoring the young and the old, we'd expect fewer workers today - not more.  That would be incorrect too since many people continue to work past 55 (and many young Americans still work).

Here is a table of some of the demographic changes over the last 6 years:

2) There are fewer people in the prime working age group.

The bottom line is this WSJ graph is nonsense - and bad enough that the WSJ should remove it from the article.
Posted by Calculated Risk on 4/05/2014 01:34:00 PM
Newer Post Older Post Home