"Reasons for the Decline in Prime-Age Labor Force Participation"

This is a follow-up to a previous post: A Closer Look at Post-2007 Labor Force Participation Trends

From Melinda Pitts, John Robertson, and Ellyn Terry at Marcoblog: Reasons for the Decline in Prime-Age Labor Force Participation. They focus on prime working-age population (25 to 54 years old).  They discuss a number of topics with several graphs. Here is their conclusion:


The health of the labor market clearly affects the decision of prime-age individuals to enroll in school or training, apply for disability insurance, or stay home and take care of family. Discouragement over job prospects rose during the Great Recession, causing many unemployed people to drop out of the labor force. The rise in the number of prime-age marginally attached workers reflects this trend and can account for some of the decline in participation between 2007 and 2009.

But most of the postrecession rise in prime-age nonparticipation is from the people who say they don't currently want a job. How much does that increase reflect trends established well before the recession, and how much can be attributed to the recession and slow recovery? It's hard to say with much certainty. For example, participation by prime-age men has been on a secular decline for decades, but the pace accelerated after 2007—see here for more discussion.

Undoubtedly, some people will reenter the labor market as it strengthens further, especially those who left to undertake additional training. But for others, the prospect of not finding a satisfactory job will cause them to continue to stay out of the labor market. The increased incidence of disability reported among prime-age individuals suggests permanent detachment from the labor market and will put continued downward pressure on participation if the trend continues. The Bureau of Labor Statistics projects that the prime-age participation rate will stabilize around its 2013 level. Given all the contradictory factors in play, we think this projection should have a pretty wide confidence interval around it.

CR note: I think this is an important graph ... 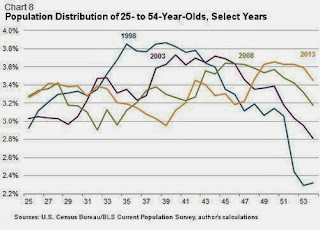 This graph shows the population distribution of the 25 to 54 age group over time. In 2013, the largest group is the tail end of the "boomers" - and this is a key reason why disability has increased in the prime working-age population.    This also probably explains the slight pickup in retirement for prime-age workers.