The U.S. hotel industry reported occupancy and revenue-per-available-room decreases during the week of 13-19 April 2014, according to data from STR, parent company of Hotel News Now.

The weekly decline was probably related to the timing of Easter, however the 4-week average of the occupancy rate is solidly above the median for 2000-2007, and is at the highest level since 2000. 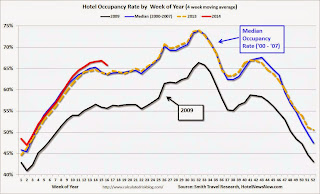 The red line is for 2014 and black is for 2009 - the worst year since the Great Depression for hotels.

Through April 19th, the 4-week average of the occupancy rate is tracking higher than pre-recession levels.