Although challenging weather conditions in many parts of the country continued to impact customer traffic in February, the National Restaurant Association’s Restaurant Performance Index (RPI) remained above 100 for the 12th consecutive month. The RPI – a monthly composite index that tracks the health of and outlook for the U.S. restaurant industry – stood at 100.5 in February, down 0.2 percent from January’s level of 100.7. Despite the modest decline, the fact that the overall RPI remains above 100 continues to signify expansion in the index of key industry indicators.

“Restaurant operators continued to report net positive same-store sales results in February, despite customer traffic levels that were challenged by the weather,” said Hudson Riehle, senior vice president of the Research and Knowledge Group for the Association. “Looking forward, operators are generally optimistic about sales gains in the months ahead, although they aren’t as bullish about the overall economy.””
...
Although results were mixed in February, restaurant operators reported net positive same-store sales for the 12th consecutive month. ... In contrast, restaurant operators reported a net decline in customer traffic for the third consecutive month.
emphasis added 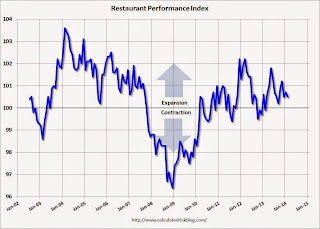 Restaurant spending is discretionary, so even though this is "D-list" data, I like to check it every month - and this is fairly positive considering the terrible weather in February.
Posted by Calculated Risk on 3/31/2014 01:51:00 PM
Newer Post Older Post Home