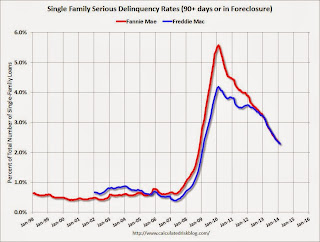 Although this indicates progress, the "normal" serious delinquency rate is under 1%.

Note: Very few seriously delinquent loans cure with the owner making up back payments - most of the reduction in the serious delinquency rate is from foreclosures, short sales, and modifications.