Single-family housing starts in January were at a rate of 573,000; this is 15.9 percent below the revised December figure of 681,000. The January rate for units in buildings with five units or more was 300,000.
emphasis added

Building Permits:
Privately-owned housing units authorized by building permits in January were at a seasonally adjusted annual rate of 937,000. This is 5.4 percent below the revised December rate of 991,000, but is 2.4 percent above the January 2013 estimate of 915,000. 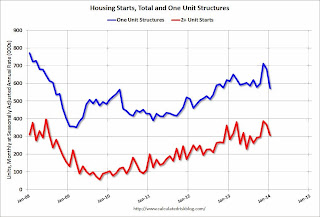 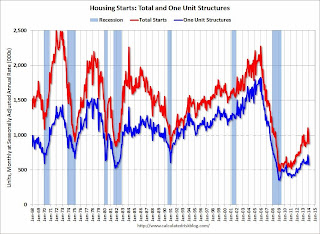 The second graph shows the huge collapse following the housing bubble, and that housing starts have been increasing after moving sideways for about two years and a half years.