However the Federal Government subtracted 0.98 percentage points from growth in Q4, and residential investment subtracted 0.32 percentage points.    Imagine no Federal austerity - Q4 GDP would have been above 4%.  Luckily it appears austerity at the Federal level will diminish in 2014, and of course I expect that residential investment will make a solid contribution this year.

Change in private inventories made another positive contributions in Q4 (added 0.42 percentage points).  I expect inventories will probably be a drag in 2014.

The first graph shows the contribution to percent change in GDP for residential investment and state and local governments since 2005. 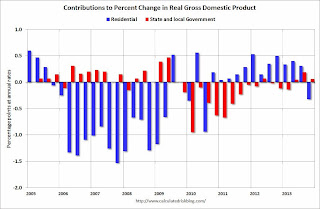 The blue bars are for residential investment (RI).  RI added to GDP growth for 12 consecutive quarters, before subtracting in Q4.  However since RI is still very low, I expect RI to make a solid positive contribution to GDP in 2014. 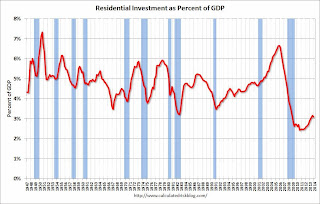 Residential Investment as a percent of GDP has bottomed, but it still below the levels of previous recessions. 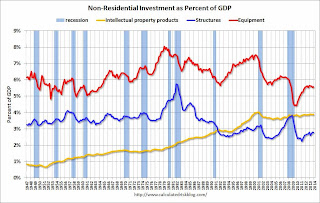 I'll add details for investment in offices, malls and hotels next week.