Earlier I posted some questions for next year: Ten Economic Questions for 2014. I'll try to add some thoughts, and maybe some predictions for each question.

Here is a review of the Ten Economic Questions for 2013.

9) Housing Inventory: It appears housing inventory bottomed in early 2013.  Will inventory increase in 2014, and, if so, by how much?

Now an increase in inventory would probably mean smaller price increases in 2014.

This graph shows nationwide inventory for existing homes through November 2013. 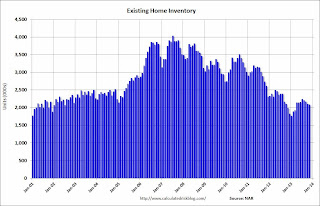 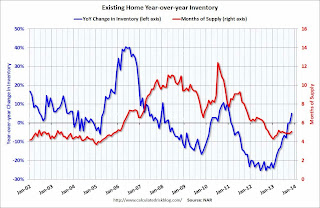 Whenever I talk with real estate agents, I ask why they think inventory is so low. Last year, a common answer was that people didn't want to sell at the bottom. In a market with falling prices, sellers rush to list their homes, and inventory increases. But if sellers think prices have bottomed, then they believe they can be patient, and inventory declines.

Now - a more common reason for low inventory - is that potential sellers can't find homes to buy (because inventory is so low).   In this case, a little more inventory will lead to more inventory.

Another reason for low inventory is that many homeowners are still "underwater" on their mortgage and can't sell.  This is less of a problem now than a year ago.

With the recent price increases, some potential sellers will probably come off the fence, and more of these formerly underwater homeowners will be able to sell.